You are here: Home / Pet / Why should I neuter my kitten? 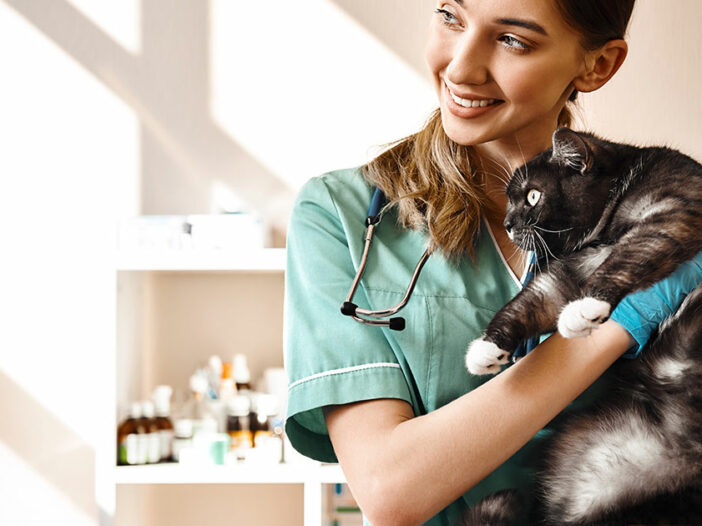 Neutering is the name for the surgical procedure to sterilise cats. The word “neutering” can be applied to both male and female cats. This procedure is also sometimes referred to as “castration” for male cats and “spaying” for female cats.

However, this is not the only thing neutering does to cats.

How does neutering work?

In males it removes the ability to produce sperm which can fertilise female cats.

In female cats the ovaries and uterus (womb) are removed. This removes the ability to produce fertile eggs and to become pregnant.

The procedure itself is performed by a vet. Neutering both male and female cats is a routine operation and is very safe. Complication rates from the surgery are very low and the vast majority of cats recover very quickly indeed. The procedure is done under general anaesthetic, so your cat is completely asleep and shouldn’t feel a thing.

Neutering is typically performed as a day procedure, so your cat will go to the vet in the morning and come home that same day in the afternoon or evening.

Your vet may advise you to do a blood test before the anaesthetic to check that everything is as it should be, and may also advise that your cat goes on a drip during the procedure. You should always discuss this with your vet who can advise you on the specifics for your cat. For most routine neuterings it is not required to do these things.

I typically tell owners to expect that their cat will come home feeling hungover for that evening. But usually the following day cats are back to pretty much normal! I’m always amazed by how fast cats bounce back from neutering. Male cats in particular are often more or less back to their normal selves later that same day!

I always advise that cats go home with a pain-killer to make sure they are comfortable while they heal. Sometimes it seems like they don’t need any pain-killers but I know I’d want pain relief if I was them!

Often the most difficult thing after neutering is trying to keep your cat quiet. Cats usually recover so well they try to go back to normal straight away. If possible, it’s better for them to rest for a couple of days while they heal internally.

It is also important not to let your cat lick at the wound after their surgery. Licking wounds can lead to infection, so your vet may advise that your cat wears a cone (“lampshade”) or a pet-shirt that looks like a baby-onesie or “babygrow”.

For more information regarding what to expect after surgery, have a look at this guide.

What are the benefits?

There are a number of proven benefits of neutering. The benefits are different for male cats and female cats. Owners also benefit from neutering, and so does “cat-kind”.

Neutered cats are much easier to live with! Un-neutered cats exhibit a number of annoying habits which neutering helps with:

What are the potential complications?

The risks of the surgery itself are very low. Complications of all types are uncommon or rare.

Uncommon complications are swelling and soreness around the surgical site and infection. If you suspect this is happening you should go back to your vet who should be able to help get these problems resolved quite simply.

Rare complications are by their nature rare. I have neutered hundreds (maybe even thousands, I’ve lost track!) of cats and have never seen a severe complication. However, sometimes things go wrong with and any anaesthetic or surgery.

Overall the risks of the surgery itself are very low, and the benefits are much higher than the risks.

What about after the surgery? Will my cat get fat or change personality?

Neutering does not change your cat’s personality. He or she will still be the same person afterwards as they were before. For this same reason, neutering isn’t a miracle cure for behavioural problems!

The main potential downside to neutering is that cats tend to want to eat more food afterwards. This means that if you feed them as much as they want, they can put on weight. The simple answer to this problem is simple. After your cat has been neutered feed them the same amount as before. That’s it!

What is the best time to neuter?

The timing of neutering is a bit of a contentious subject and has no definite answer.

Traditionally cats were neutered at 6 months old. This is after puberty for most cats. However, this is not based on any science.

The modern advice is to neuter at 4 months old. This is scientifically proven not to cause any significant health problems. This study has some limitations, but overall is a good study and the best evidence currently available.

One theoretical problem with early neutering relates to bones. Neutering cats at a young age slows the rate that the growth plates (weak points at the end of bones) close up. This can make these cats more likely get certain fractures. However, in real life this risk is very low and probably is evened out by the fact that neutered cats are less likely to be hit by cars.

Neutered cats live longer, and they are much easier to live with.

Neutering won’t change your cat’s personality and won’t make your cat fat as long as you remember to be careful of how much you feed them.

Neutering is a very safe and quick procedure, and the vast majority of cats recover very quickly indeed.

In terms of timing, I would neuter at 4 months old. This saves the risk of accidental pregnancy, urine spraying and having to live with a female cat who is in season!

Both of my cats are neutered and I would always do the same in future.