You are here: Home / Food / Baccala 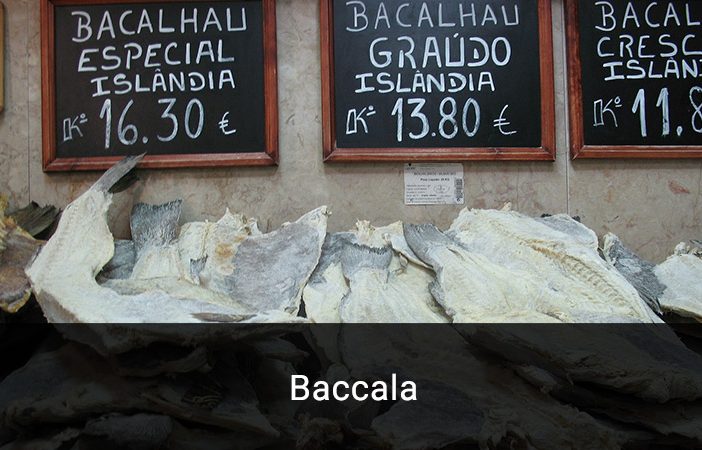 Better known in the States by the name “salt cod”, baccala has been the preserved fish of choice for both landlocked and coastal Europeans since the 16th century.

Until then, preserved cod from Norweigan waters and off the East Coast of North America made its way to the continent, in very limited quantities; Cabot’s discovery of Newfoundland in 1497 opened up the surrounding waters for the serious exploitation of existing cod populations that continues to this day.

There are literally thousands of recipes using baccala, with origins in French, Spanish, Portuguese and, naturally, Italian cuisine, each one beginning with the preservation process.

The traditional method of preservation has a fisherman beheading a 3 to 6-foot-long cod (of which there are about 60 species), splitting it along the belly and discarding the backbone, save for a small portion of the tail.

The fish is then heavily salted and tightly stacked in many layers. As the cod’s water-bearing cells begin to erupt in reaction to the salt, the liquid is removed and more salt is added, a process that continues for about 10 days, after which time the fish, with its water content under 40%, is impervious to decay for up to 12 months.

Once a cook is ready to work with the salt cod, it must be soaked for at least 48 hours, to rehydrate and remove a percentage of the salt content. In the market, you should look for a snowy-white fleshed fish that is somewhat flexible and compact.

I recommend buying thick fillets (generally about 1 inch), in the smallest portions available (but no narrower than 3 inches), for the most even and effective soaking. The soaking liquid should be changed at least three times in the course of 48 hours.

Some cooks prefer to soak their cod in milk, for more rapid salt-leaching, but there is no need to go to the additional trouble and expense. Remove the skin and bones from a rehydrated piece of baccala before proceeding with your favorite recipe.