You are here: Home / Health / Foods That Helps Alleviate Back Pain 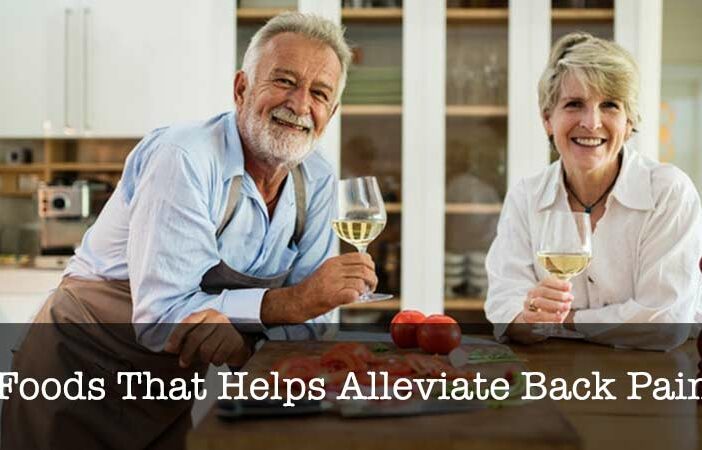 This article is by contributor Dr. Wells

Even if you consider yourself a healthy person, back pain can get in the way of living your best life. Alleviating back pain can be done by avoiding the triggers that cause it.

7 Foods That Can Alleviate Back Pain

Inflammation and Back Pain

There are several causes of back pain, but one common cause is inflammation. In a study published in the Annals of New York Academy of Sciences, biomarkers of inflammation were studied to understand how inflammation causes pain and degeneration in the vertebrae.

The idea behind the study is that patient care can be better understood and directed by looking at biomarkers.

Inflammation is clearly a cause of back pain, so fighting it can bring relief. However, inflammation is necessary when an injury needs to be repaired.

In another study published in The British Journal of Nutrition, inflammation is “marked by increased blood flow, capillary dilatation, leucocyte infiltration, and the [localized] production of a host of chemical mediators, which serves to initiate the elimination of toxic agents and the repair of damaged tissue.”

So, foods that prevent unnecessary inflammation can be helpful to alleviate back pain.

The research found that one way to fight low-grade inflammation was to look at both foods eaten and patterns of eating, rather than looking just at one aspect.

The research in The British Journal of Nutrition also shared the importance of a better understanding of biomarkers when choosing foods to eat to alleviate inflammation.

But, until science learns more about inflammation and personalizing the diet, eating a robust diet of anti-inflammatory foods is a step towards avoiding and alleviating back pain.

What Not to Eat?

Before looking at what to eat, it is helpful to look at what not to eat. Sugar, especially refined white sugar, is a culprit in inflammation. In a study published in Nutrients, the effects of sugar on inflammation was investigated.

To alleviate back pain, removing foods with refined sugar, like high-fructose corn syrup can be helpful. This includes foods like white bread, donuts, candy, and full-calorie sodas. In general, many highly processed foods contain excessive amounts of refined sugar.

On the other hand, there are plenty of foods that can help fight inflammation and give some relief to back pain. These are foods that are not processed and are low in sugar. Interestingly, while many processed foods end up being white, most of the healthy foods are full of color.

A rainbow of foods that can alleviate back pain

Tomatoes are one of the healthiest foods you can eat because of the nutrients. Tomatoes are also antioxidants – specifically one called lycopene. Antioxidants which help fight cell damage and they also fight inflammation.

Tomatoes also are filled with vitamin C and potassium. Tomatoes are so healthy due to lycopene that they have been found to help fight cancer, as shown in a study published in Nutrients.

You do not have to eat tomatoes on their own. In fact, one of the healthiest ways to eat a tomato is to cook it in olive oil. In a study published in the Asia Pacific Journal of Clinical Nutrition found that tomatoes cooked in olive oil actually improved lycopene consumption.

When you choose your olive oil, pick the extra-virgin version of it. Extra-virgin olive oil has healthy monounsaturated fat and it has an antioxidant and anti-inflammatory called oleocanthal, which behaves similarly to ibuprofen, but without side effects, as shown in a study published in Current Pharmaceutical Design.

Having a cup of green tea is another way to alleviate back pain. Green tea is a good alternative to unhealthy sodas. Green tea is a plant-based beverage and is loaded with polyphenol, which is responsible for reducing inflammation.

In a literature review published in Chinese Medicine, all of the known benefits of green tea were shared: “Tea components possess antioxidant, antimutagenic, and anticarcinogenic effects and could protect humans against the risk of cancer by environmental agents.”

If avoiding sweet foods is challenging, then you can turn to berries for natural candy. The best berries to eat include blueberries, strawberries, raspberries, and blackberries.

In a study published in Critical Reviews in Food Science and Nutrition, the anti-inflammatory effects of berries, as well as grapes and oranges, were researched. These foods also contain polyphenols that fight inflammation.

The recommended fish include salmon, anchovies, swordfish, tuna, trout, sardines, and mackerel. If you are not able to eat fish on a regular basis, then include a fish oil supplement in your diet.

If you are a vegetarian and prefer to not eat fish or fish oil, there are a few good choices for omega-3 fatty acids.

They include chia seeds and flax seeds, both can be put on salads or placed in smoothies. Soybeans, seaweed, and walnuts are also good choices. Soybean oil or canola oil can also be eaten in place of fish.

Another delicious option for an anti-inflammatory diet is dark chocolate. Because dark chocolate has one of the highest flavonoid contents of any foods, it can be helpful in reducing back pain.

However, it is wise to eat dark chocolate with very little milk content to get the most benefits of the anti-inflammatory properties. Research published in Nutrients found that consuming cocoa-rich food reduced inflammation biomarkers.

Dr. Brent Wells founded Better Health Chiropractic & Physical Rehab in Alaska in 1998 and is considered as one of the best Wasilla chiropractors.

In his free time, he enjoys spending time with his family, reading, and volunteering.