You are here: Home / Celebrity News / Agreeable and conscientious, that’s us! 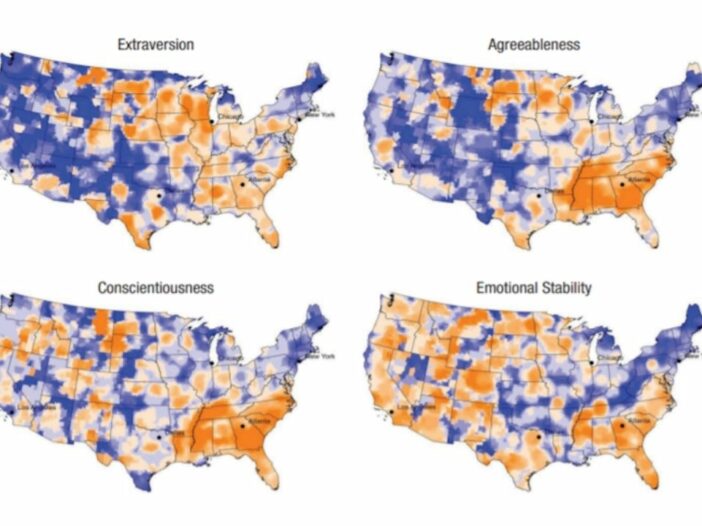 These maps of regions according to personality traits are from Richard T. Florida‘s new book Who’s Your City? Florida’s hypothesis is that personality and a city or region’s economic growth and development are very much correlated, with openness to experience being the only type that seems to have a direct role in regional economic development.

Some explanation of the traits of which Georgia has a concentration:

Agreeableness is associated with jobs in management and health care. And, while it is positively associated with innovation, high-tech industry, wages, and income in our more advanced models, the effects are quite small. This could mean that the ability to work well with others contributes, albeit slightly, to innovation. Extroversion is significantly correlated with management and sales jobs, but it too has no effect on human capital overall, high-tech jobs, or regional income.

Conscientiousness is an important characteristic to success in many fields and industries. A management consultant I know likes to say that for every open and creative person who comes up with a new idea, a company needs 10 or 20 conscientious ones to carry it out… But as our statistical results show, conscientiousness is not a big factor in regional growth. In fact, it turned out to be negatively associated with innovation, wages and income, and housing values. Then again, as Rentfrow suggested, conscientious individuals tend to be rule-followers; give them a clearly defined task and they will develop the most efficient procedure for completing it. But when the task is not clearly defined and requires creative thought, someone who is highly conscientious but not very open will struggle to create something completely original. The way I see it, conscientiousness alone is not enough to power regional growth.